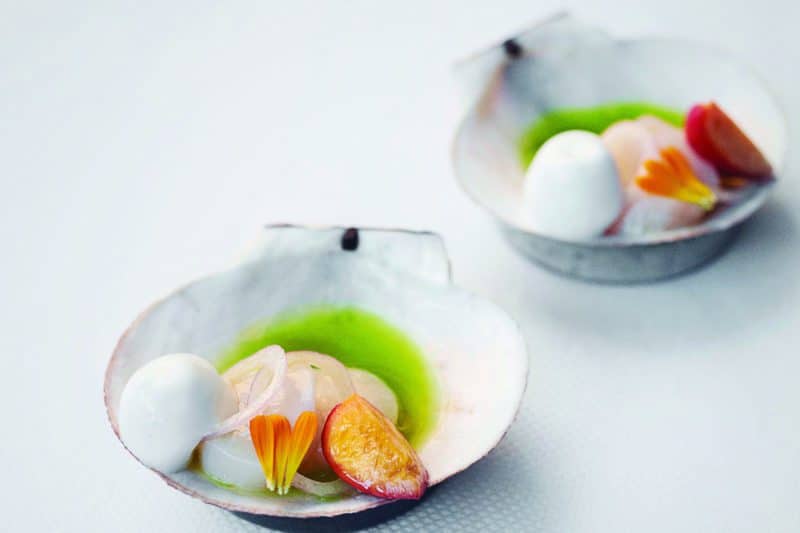 For 26 years now, chef-owner Normand Laprise has stayed true to his mission here, to cook in lockstep with the seasons and to showcase the best local products, both wild and cultivated.

He refers to his culinary style as “une cuisine de produits.” It means that the ingredients star on his plates, undisguised and under-manipulated, their natural qualities highlighted with playful and unexpected contrasts of flavour and texture. His compositions are often whimsical and always colourful. Techniques are grounded in the best French and Asian traditions, but their expression is entirely Québécois. In winter, you might enjoy the clean, bright flavours of princess scallops farmed off the Magdalen Islands, served raw but lightly cured with calamansi vinegar, with orange and diced grapefruit gelée. In early summer, they might instead be paired with strawberry and basil.

Many of the Quebec products that the best restaurants rely on from coast to coast—and stateside, too—were originally developed for Laprise, who challenged and nurtured his suppliers for decades before that was trendy.Think, for example, of Gaspor (St-Canut) suckling pig—recently served here as a roasted rack, with crackling, chanterelles, cippolinis and thyme-infused pork jus. Unfortunately, the small, highly dedicated artisanal suppliers of the sort that Toqué favours come and go. The pré-salé lamb from Île Verte is no longer available. And this is the last season for one of Quebec’s most admired products, which debuted on the table here in the ’90s and is now exported even to butchers in Paris—le cerf de Boileau. Come and eat some while you still can. In the world according to Joe Beef, restaurants are best grown organically.

Celebrating its 30th anniversary this year, Langdon Hall remains as vital and extraordinary